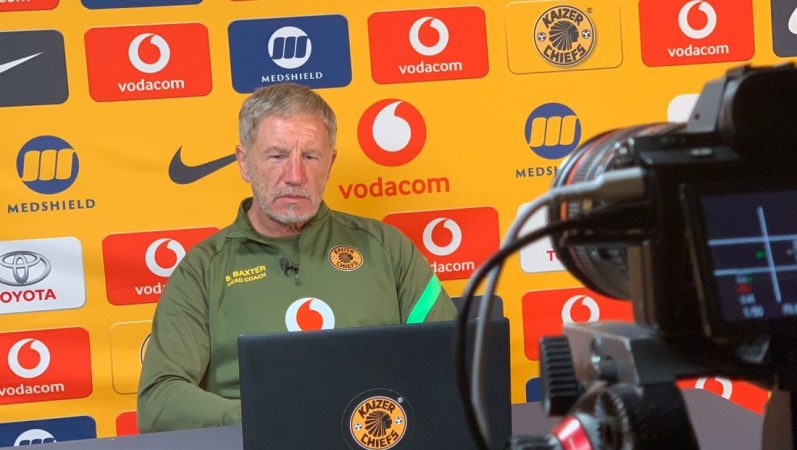 Kaizer Chiefs coach Stuart Baxter is looking forward to what will effectively be his 14th Soweto derby in the DStv Premiership as Chiefs coach when Amakhosi face Swallows FC in the DStv Premiership this afternoon at 15h30. The Chiefs coach heads into the game with depleted personnel but is quietly confident that his team can manage the occasion, as he addressed a number of issues with www.kaizerchiefs.com. He also is not reading too much into Swallows’ challenging start to the season, as he believes that teams lift their game on big occasions like a derby.

No day off against Swallows:

We had our match in Maritzburg and because we did three warmups because of the lights, it was 15 kilometers instead of a usual 10-11 kilometers game. Then we had the game quickly afterward. We have a few cases of Covid and the suspensions (of Njabulo Blom and Cole Alexander). In addition, we have the normal injuries that everyone else has.  Does that mean that we have an excuse to have a day off against Swallows? Certainly not, we will put out a team that will win the game.

Ready for the challenge:

We had a meeting with the players, where I said to them that if anybody thinks there is an excuse, they should not come to the game. We know how we are going to play, and we know how Swallows play. It’s going to be a good competitive game. It’s a derby and we want it to be treated in that way. We are up for it. It has been a challenge and the players have got to answer that challenge. We are not going to be doing anything we don’t know against Swallows.

It’s up to the players who are coming in to throw their hat in the ring and say I am going to give a performance and then you decide if I stay in the team. That’s how we have got to look at it. We know all the challenges and we have to come with a solution and that is what we are hoping to do.  Our final training on Saturday was compromised because of the weather. Nothing is perfect in life; we make a plan. We virtually have the whole midfield that played in the last game out, but we have players in the squad who have been chomping at the bit. Now it’s up to them to show I was wrong to be leaving them on the side. Now we will tweak it a little bit and see what we can achieve.

On Swallows’ start to the season:

I can’t judge the severity of another team’s problems. If Swallows are looking at us, they could say they have suspensions and injuries and Covid and other things. They can’t tell if that’s firing us up or getting us down. I can’t tell with Swallows. If it was me, I would be using it as motivation. I don’t know if it’s going to hurt them or fire them up. I am banking on them being fired up in a derby and we are going to have to play well.