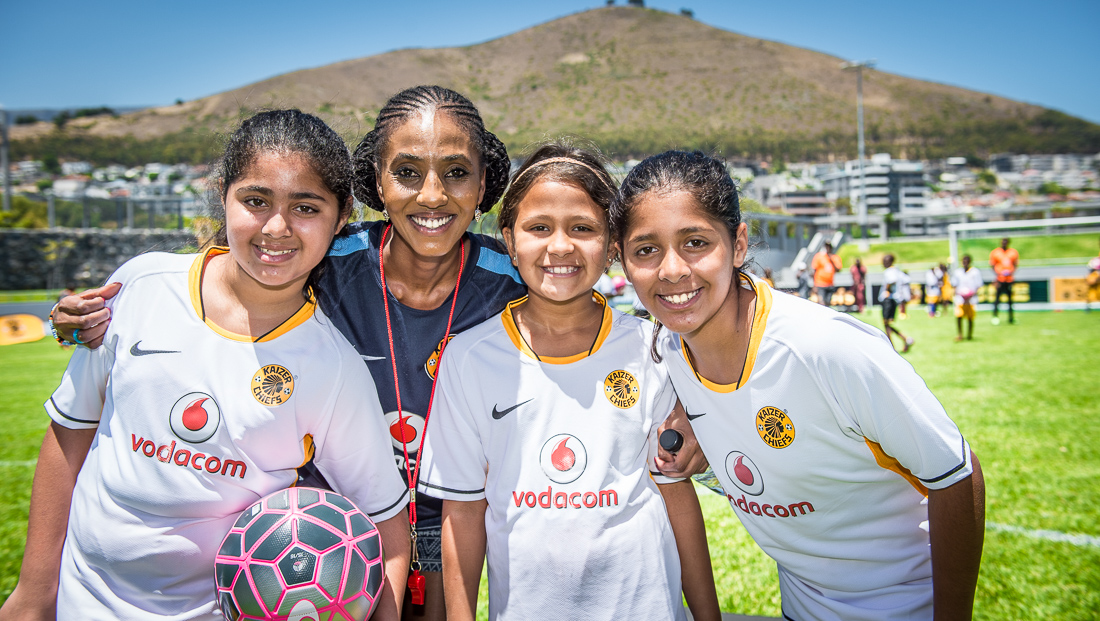 Over the years Kaizer Chiefs has been known to dominate on the field of play, putting smiles on the faces of many of its supporters. Off the field, the Club has been active too, reaching out to its community and also abroad by making a difference in their lives.

Kaizer Chiefs’ Corporate Social Responsibility has focused on enriching the lives of women, children and the less fortunate. Whether alone or through its sponsors and partners, the Club has reached out to the needy.

The Club through Kaizer Chiefs Mobile, the mobile partner, recently donated in excess of R1 million to The Gift of the Givers. The cheque was handed over by the Chairman, Kaizer Motaung to Dr Imtiyaz Suliman. The Gift of the Givers as a charity have demonstrated extraordinary effectiveness in dealing with diverse issues including humanitarian crises around the world, providing disaster relief such as recently done in Nepal. In South Africa, they recently assisted setting up places of safety during the xenophobic attacks, like in Johannesburg and Durban.

The Club has partnered with its main sponsor, Vodacom over the years to play a part in the community. R25 000 was donated to Tumelo Children’s home through the Fans’ Player of the Year Tefu Mashamaite. The previous winner, Willard Katsande also donated R25 000 to Compass in Edenvale as part of the CSI element of the prize.

During Mandela Day in July 2014, the players and the Technical Team packed food parcels that were to be distributed to the needy.

We partnered up with our key sponsor Hollard and we visited the oncology ward at the State Hospital in Windhoek on the 14th of February 2014 during one of our CAF games. We handed over a cheque for N$50 000. A few players were present and they brought smiles to the children in the ward.

The CSI element of the Carling Black Label Cup (CBLC) has seen a pre-school, Diana Davis in Walmer, Port Elizabeth in October 2012 being refurbished and books were donated as part of the R500 000 money.

Another R500 000 was pumped into a soccer ground development project in Giyani were kids will benefit from having a world class facility where they can develop their soccer skills. Kit and soccer balls were also donated towards the project.
Projects in the CBLC CSI pipeline are; a mini-bus will be bought and donated to a pre-school in Mdantsane, East London and also Takuana Ne Shome, a NPO established in 2014 that conducts health talks, counselling sessions and cares for people affected and infected by HIV/AIDS/TB will receive some funding from the Club.

Over the years, the Club has been supporting soccer tournaments and small teams in the communities through the donation of soccer kit. Recently, kit was donated to Afrika Tikkum, an NPO that was formed in 1994, with a vision to alleviate poverty. They currently operate in 6 townships across Gauteng and the Western Cape delivering their Cradle to Career model which takes young people from early infancy through young adulthood and into the world of work. They hosted a soccer tournament on Mandela Day, July 2015.

The Club has also supported a Women’s Day soccer tournament in Emalahleni by donating kit and also to Delta Park School, Phefeni High School in Soweto and lots more.

The Supporters Club Branches nationwide have followed suite with this spirit of giving. They have over the years raised money and donated to the needy and also visited the elderly and the sick.

Kaizer Chiefs held a soccer clinic for young kids at the Green Point Athletics Stadium at the end of 2015. The event was attended by Cape Town’s Executive Mayor Patricia de Lille, who was wearing an Amakhosi jersey for the occasion.

There were also some kids present from the Vodacom Western Cape region, while 20 others were the lucky winners of a competition run by KC Mobile.

Kaizer Chiefs supported International Literacy Day by attending an event organised by the National Library of South Africa on Friday the 14th of September 2012. The event took place at the National Library of South Africa auditorium in Pretoria and it hosted children from Children’s Homes and surrounding primary schools including guest of honour Ontlametse Phalatse, a 13 year old girl who is suffering from a rare disease.
Crossing borders

As part of the inaugural King’s Super Cup and Kaizer Chiefs CSI initiatives, Amakhosi players and coaches visited the Manzini Sundowns academy in Manzini and Waterford Kahlamba College in the capital city of Mbabane in July 2015.
137 pupils from 4 schools (Montessori primary, Nkaba primary, SOS children’s village and Waterford college) in the Mbabane area were taken through their paces and given some invaluable football information by assistant coach Doctor Khumalo, Tsepo Masilela, Daniel Cardoso, Morgan Gould, Sibongiseni Ngcobo and George Maluleka.