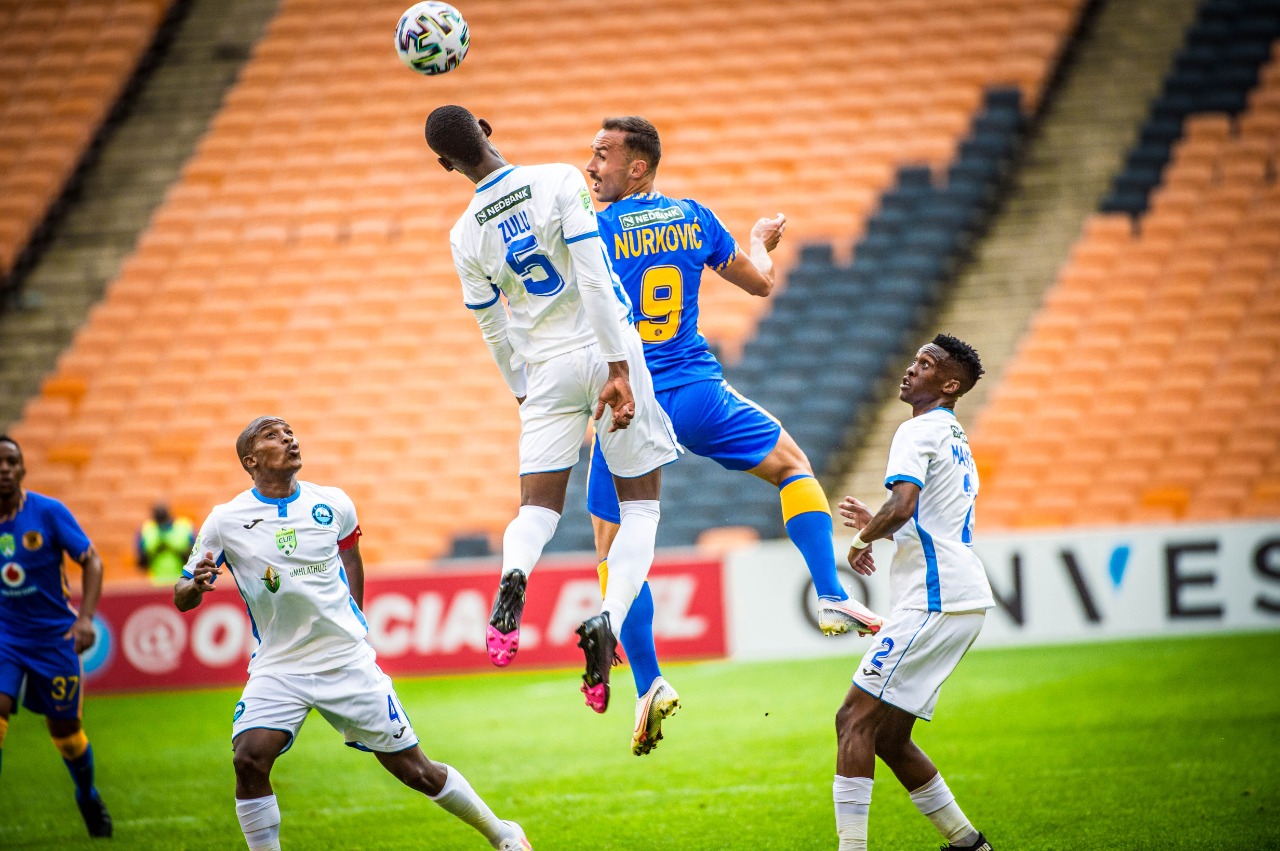 Kaizer Chiefs exited the Nedbank Cup at the Round of 32 stage after losing to GladAfrica Championship side Richards Bay FC at FNB Stadium on Sunday afternoon. The final score was 2-1. Thabani Dube headed the visitors into the lead in the 29th minute. Chiefs were down to ten men when Siphosakhe Ntiya-Ntiya was sent off in the 65th minute. Amakhosi did find a way back into the game when Leonardo Castro scored a 76th minute equaliser. Richards Bay scored the game winner through Siyabonga Vilane in the final minute of regulation time.

With not much goal mouth action for the opening 28 minutes, the first major action in the 29th minute saw the visitors take the lead. A corner from the right was floated in by Khanyisa Mayo as Daniel Akpeyi came off his line and tracked back to punch the ball clear. He was unable to time the flight of the ball and missed it at the back post, where Dube came running in ahead of Kgotso Moleko and headed the ball home into a virtually empty net.

Chiefs looked for an immediate response and tried to find a way back into the match after a quick one-two between Siphelele Ntshangase and Darrel Matsheke - the latter was picked out by the former down the right channel, he then cut the ball towards his left finding Nurković, who close in on goal tried pushing the ball past Malcolm Jacobs. The keeper managed to make himself big and blocked the ball as he stopped the Chiefs skipper from finding an equaliser.

With ten minutes to go to halftime, Ntshangase managed to turn in a well weighted corner from the left which went beyond Jacobs. The ball evaded a bevy of Richards Bay defenders and also Nurković who rose high to try and meet the ball which would have gone into the back of the net had he been able to get the deftest of touches to the ball.

In the 37th minute Akpeyi atoned for his earlier mistiming of the ball as he came off his line and managed to turn a wickedly curling freekick from the right again taken by Mayo, out for a corner. Two minutes before the end of the first half goal, scorer Dube collided with the boot of Bernard Parker, who tried an overhead kick while attacking a cross from the right.

Richards Bay lead 1-0 at the break.

Chiefs made a host of halftime substitutions in attempt to get back into the game, with Matsheke, Ntshangase, Happy Mashiane and Bernard Parker going off they were replaced by Njabulo Blom, Lebogang Manyama, Dumsani Zuma and Leonardo Castro, respectively.

Amakhosi looked an attacking threat early in the second half and came within inches of levelling matters in the 54th minute. Ngcobo managed to turn in a corner from the right which saw Nurković head the ball powerfully towards goal. Jacobs stuck out a hand and managed to get a handout to block the ball, but the ball spun towards goal and was cleared off the line by Katleho Maphathe.

On the hour mark, Nurković shot wide from close after Jacobs had spilled the ball while trying to initially deal with a cross from the left, and then a return ball from the right by Zuma, shortly thereafter Chiefs afternoon became more challenging. Ntiya- Ntiya picked up his second caution in the 65th minute for a tackle on Maphathe on the halfway line as it was his second bookable offence, he was shown a red card. Ntiya Ntiya picked up his first caution in the 32nd minute.

With two minutes of regulation time remaining, Zuma managed to float a cross in with his left foot, Castro was able to climb high and met the ball with his head, but his close-range header went just over Jacobs cross bar. In the final minute of the game, Richards Bay launched a counterattack. Thabo Maphakisa played in Bayzel Goldstone on goal. His initial shot beat Akpeyi and hit the upright but fell to Vilane who tapped the ball home to make it 2-1.

Chiefs eliminated from the Nedbank Cup at the round of 32 for the first time 2016 and will now turn their attention to the next assignment a CAF Champions League game against Wydad Casablanca in Morocco on Saturday.

Number of the Game 6:

This was Chiefs 27th meeting against teams from outside the top-flight in the Nedbank Cup since 1996-97. Tt was Chiefs 6th loss in these games. (W21)

Fact of the Match:

Chiefs exit the Nedbank Cup at the round of 32 for the first time since 2016.

Chiefs will be heading North of the continent for their next game in the Group Stages of the CAF Champions League against Wydad Casablanca in Morocco on Saturday.