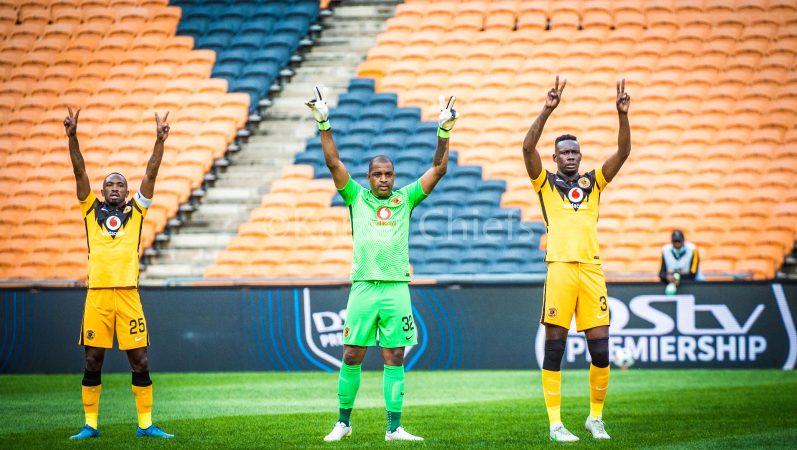 Kaizer Chiefs goalkeeper and South Africa’s second highest all-time capped international, Itumeleng Khune, and Chiefs striker Bernard Parker, have lent their support and advice for their Chiefs team-mates and the Bafana Bafana squad ahead of a crucial double header against Ethiopia.

Bafana are about to play two massive 2022 FIFAWC qualifying games against Ethiopia in Bahir Dar on 9 October and in Johannesburg on 12 October, as the race to reach Qatar 2022 heats up across the continent and the world.

Khune, Parker and their Chiefs teammate Erick Mathoho all featured in an intense game when Bafana last faced Ethiopia in FIFAWC qualifier in qualification for the 2014 tournament, a game South Africa lost 2-1.

Parker has been doing his due diligence on the Ethiopians.

“They have speedy players,” he said of his assessment of them, adding “we have the skill to be able to counter them.”

Parker urged Bafana to be clinical in dead ball situations.

“We are dangerous from set piece situations and when we get them, we need to make them count for us,” says Parker.

The 72 times capped Parker, who scored 23 goals for Bafana Bafana, believes these two games against Ethiopia will go a long way towards helping South Africa reach the next stage of qualifying.

“We need to target to get six points from these games. I think if we can come out with four points, it will be good because then all the pressure is on Zimbabwe and Ghana going into the last two games,” adds Parker.

Khune for his part is hoping that the current Bafana squad come back from their travels with a win.

“We have been there before,” exclaimed Khune, speaking about his experience with Bafana Bafana during the 2014 FIFAWC qualifiers.

“We did not get the positive result we wanted. I think just like we did back then we have a great squad again. They must go out there and enjoy themselves and make sure at the end of the campaign they qualify for the World Cup,” says Khune.

As to what they can expect in Ethiopia, Khune rolling back the years to 16 June 2013 when he came up against Ethiopia, believes that this game will be different for a number of reasons.

“It is different compared to us because we played in Addis Ababa. This game is in Bahir Dar. It is an intimidating place to play in. If there are no fans in the stadium, it will work in our favour,” says Khune, mindful of the passionate Ethiopian support.

He does believe though that Bafana have the ability to do well on the road.

“They will get a positive result and leave with a smile on their faces. To the guys who have been selected, I wish them everything of the best and they must enjoy representing the nation. Never look back and regret while you can grab the opportunity to play for your country and give your all,” urged the experienced Khune.

He went on to add that the country needs its players to give their all with the national team.

“We have to respect the badge and the people of the country. So when we get a call up, we must give our all for the country, the people and the flag,” says Khune.

This is the third clash in FIFAWC qualifiers between South Africa and Ethiopia. In qualifying for the 2014 FIFAWC the sides played out a 1-1 draw in Rustenburg. Ethiopia then won their game at home to progress ahead of South Africa.