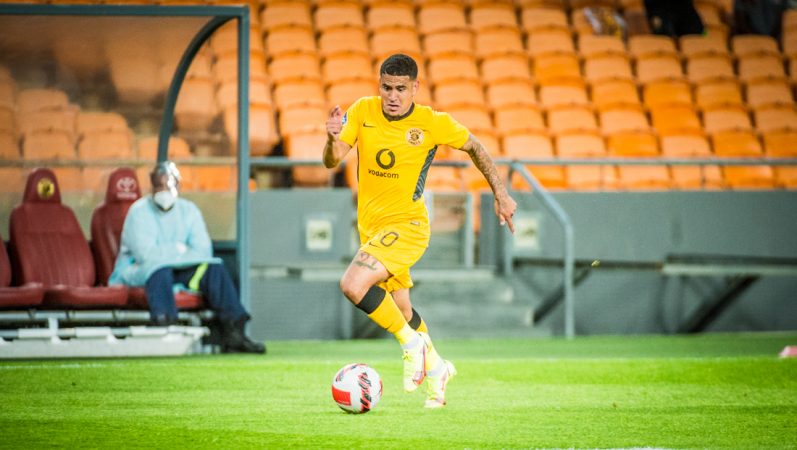 Kaizer Chiefs midfielder Keagan Dolly won his second Goal of the Month Award for the current campaign when his match winning strike for Chiefs in their 2-1 away win over Chippa United on 2 April was voted as the best goal for April 2022 in the DStv Premiership.

It is somewhat ironic as both of Dolly’s goal of the month awards this season have come for strikes against Chippa United. In October/November, the first of his two goals against Chippa in a 4-0 home win got the nod for the best goal of that voting period.

Commenting on winning another goal of the month award he said: “It feels good to win these types of awards, thanks to our supporters for voting for us and showing their support. For me personally, it’s a confidence booster to score these amazing goals and help the team.”

With the score tied at 1-1, Dolly stepped up in the 75th minute and turned the ball home spectacularly from a free kick. The attacker believes the extra time spent working on dead ball situations paid off for him and the team.

“We take our set pieces seriously,” he confirms. “We practice at training – Khama Billiat and I stay behind after sessions and take free kicks. Luckily enough,  it was in the range that I could take it and it went in. Throughout the season, we wanted to score from set plays, and I guess I was just the lucky one on that day.”

Of winning both his awards for goals against Chilli Boys, he added: “I really don’t know how it happened that way, it never crossed my mind. I think the way we played against Chippa, home and away, we created a lot of chances and there were opportunities for us to score good goals. Unfortunately, it had to be against them. The games were such that we created opportunities and were able to win them.”

Dolly has made 13 goal contributions for Chiefs this season – scoring 8 goals and making 5 assists. He missed Chiefs’ 1-0 win over the weekend against Sekhukhune United and will be out for Amakhosi’s final league encounter this weekend against Swallows FC through injury. He says he is hopeful that the individual accolades he won this season will provide the tonic to boost Chiefs next season, and give them the push they need to challenge successfully on all fronts.