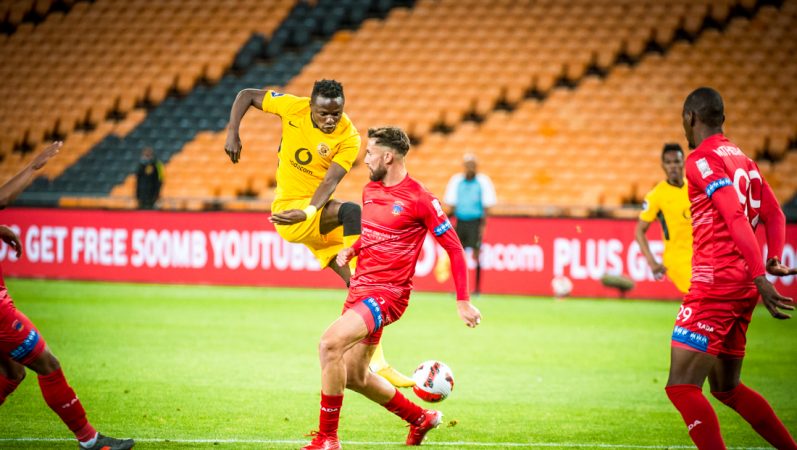 Lazalous Kambole hopes his goal that put the cherry on top of Kaizer Chiefs’ 4-0 win against Chippa United will be the catalyst he needs to go on and score more goals for Amakhosi.

Kambole’s goal against Chippa was his second goal for Chiefs and his first since August 2020.

“It was a great game,” he reflected. “We dominated the whole game. We created a lot of chances and thankfully we took them.”

Saturday’s appearance as a late substitute for Chiefs was just his second of the campaign and although the minutes on the field may have been few, Kambole was pleased to have made them count.

With a goal for the campaign and with Chiefs having both Leonardo Castro and Samir Nurković out injured, the 27-year-old Zambian with his goal staked his claim as an option for the Chiefs attack.

He is now looking to build on that confidence boosting goal.

“I am hoping that going forward I can score more goals for the team,” says Kambole.

Even though he went through the 2020-21 season without finding the net, Kambole never lost heart and never lost sight of his goalscoring objectives.

“The most important thing is to focus on the things you can change. You just have to continue working hard and the goals will come. I have to put in a lot of effort in training and pray for more goals to come,” concludes Kambole.

His appearance against Chippa was his 42nd in all competitions for Amakhosi and his 29th in league games. He will be hoping to play a goal scoring part of the game once again when Chiefs travel to face SuperSport United in their next league game on Sunday at 17h30 at the Lucas ‘Masterpieces’ Moripe Stadium in Atteridgeville.