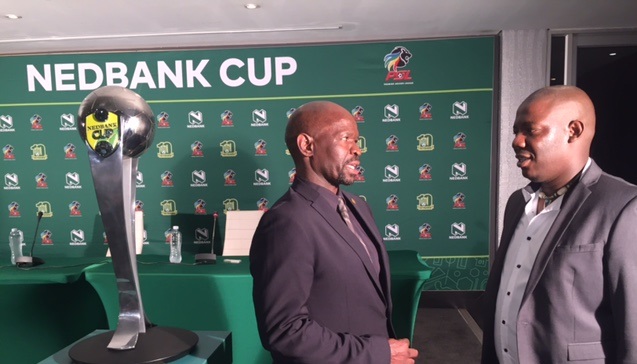 “I just met Acornbush coach Macdonald Makhubedu for the first time,” Steve Komphela remarked. “My respect for him is the same as for all other coaches, irrespective of what team they are in charge of.”

Komphela was speaking in front of a room packed with journalists at the Nedbank Cup press conference organized at the PSL.

“I have worked with a number of players from this team in the past,” Komphela revealed, before reciting the names of “Madoda Mmotha, Bongani Nyathi and Sifiso Thomo. I worked with these players during my time coaching Free State Stars.

“We must not forget that Acornbush beat Cape Town City on their way to the Last 16 and tops their regional log.”

“Come Sunday the stadium will be painted Gold and Black,” Komphela vowed. “We are doing it for Amakhosi.”

Kaizer Chiefs were surprisingly beaten in the quarterfinal of the 2011 Nedbank Cup by Baroka FC, which played at the time in the Vodacom League, the predecessor of the ABC Motsepe League.

Komphela refused to be drawn into that history: “I was not here when Baroka upset us. However, no matter who the opponent is, they always want to have one over Chiefs. When teams play us, they rise to the occasion.

“We have seen scenarios when clubs bring their A+ game against us, while looking very different the week before and even the week after. We just have a responsibility to our supporters to perform optimally on the day.”

About having second division side Acornbush United as opponents, Komphela stuck to the Chiefs way, reacting with humility, a trait from the club’s founding father, Kaizer Motaung. “We will always remain respectful. From a technical point of view, our game model of showing respect will not change against them.”

Komphela expanded, “it’s a cup competition, so it's a once off match and it’s not going to be easy.”

When asked about last year’s trophy-less season, Komphela reacted: “Every season is different and everything in life has a beginning.”

There is some talk about the capacity of the Kabokweni Stadium (about 8 000), where this Nedbank Cup fixture will be played and its conditions.

The Chiefs coach, however, didn’t want to be drawn into this discussion. “We will adapt our technical plan to the quality of the pitch. If the surface is ok, we will play our normal game. We can’t choose the stadium for an away game.”

With reference to our current form, Komphela said: “We’ve put in a lot of work, especially on the aspects that needed attention. We anticipate a good result for Chiefs and move into the quarterfinals.”