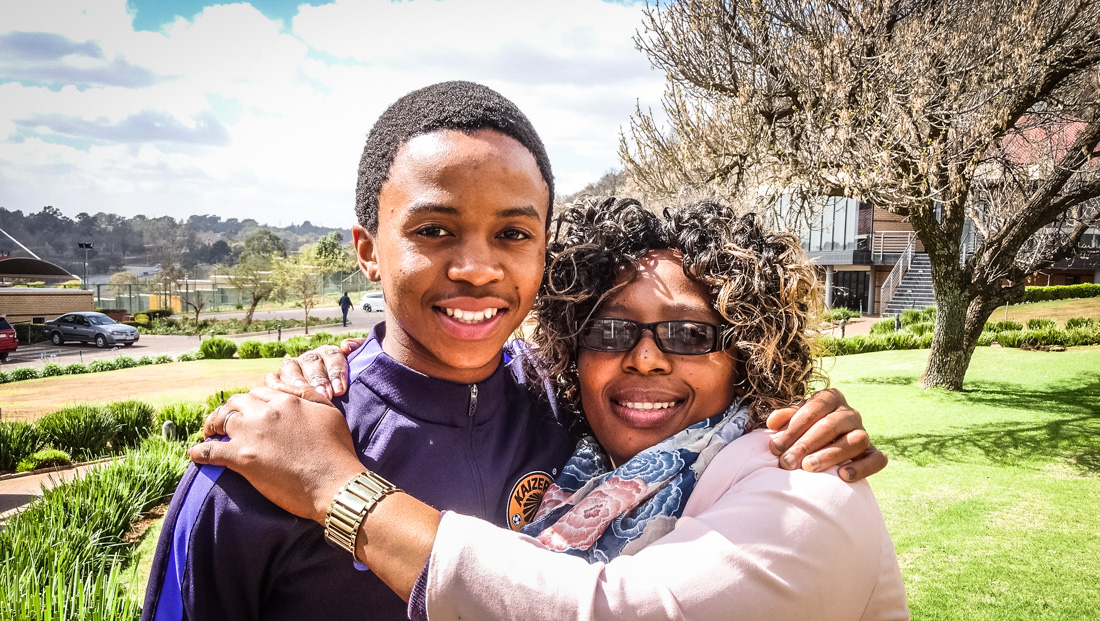 Thembelihle Audrey Ngcobo is the mother of our talented midfielder, Nkosingiphile ‘Mshini’ Ngcobo. She travelled from KwaZulu-Natal to see her son at the Chiefs Village, a very poud mother who is elated that her 17-year-old son has now joined Kaizer Chiefs’ first team squad for the 2017/2018 season.

“He was always playing with a soccer ball,” Thembelihle speaks about her son, who was born in Elandskop, a town in KwaZulu-Natal about an hour’s drive from Pietermaritzburg, “usually somewhere in the streets, even at night and sometimes in the house as well. And yes, Mshini would sometimes break a window in the house when miss-kicking the ball.” She laughs as she reminisces about those days.

Thembelihle is a teacher at a primary school in Bulwer in the Midlands region. “Our whole family supports Kaizer Chiefs,” she continues, “even long before we realised Nkosingiphile was a talented player. My favourite was always Doctor Khumalo.”

‘Mshini’ obviously missed Doctor’s playing days. His heroes are therefore from a more recent generation of the Glamour Boys.

“He was in awe of everything related to Amakhosi. For example, there were always posters on the wall in his room of Chiefs teams and players. He also enjoyed reading the Amakhosi Magazine to learn about all his big heroes.”

The young midfielder goes to Orlando High and is presently in Grade 12. “Soccer and education goes hand in hand,” the mother says, “especially when a child is young, education should be a priority. Playing professional soccer is only for a relatively short period. It’s therefore important to have a proper education for the time after the playing days.”

Nkosingiphile joined Chiefs’ youth structures in 2014 from a club in Pietermaritzburg, AmaRoto FC.

“It was not always easy at first,” Thembelihle explains, “we missed our son. He was so young and already far from home. However, we knew Kaizer Chiefs took good care of him. We also knew that Chiefs is his home.”

Thembelihle has two sons. ‘Mshini’ is the second born.

Then, the mother says: “I actually played soccer myself at college in Pietermaritzburg. I played for three years as a number 3, a centre-back. I felt like Neil Tovey.”

Nkosingiphile already represented South Africa at the Under-17 and Under-20 level. “I want him to become a good player and to always try to excel in whatever he does,” Thembelihle adds. “In addition, it’s important that he stays humble. I am sure he will, as that is his nature. Mshini is a very friendly boy, who likes to be with other people.”

She’s over the moon that her son has now signed a professional contract with Kaizer Chiefs. “I just wish him all the best.”

To end, Thembelihle wants to add something about Amakhosi’s Football Manager, Bobby Motaung: “He was very clear in the way he discussed Nkosingiphile’s position and situation with us. Bobby also said that should there ever be a problem or should we have questions, we are always welcome to call him. He has been very direct and straightforward with us. It shows that Kaizer Chiefs is a real Family.”