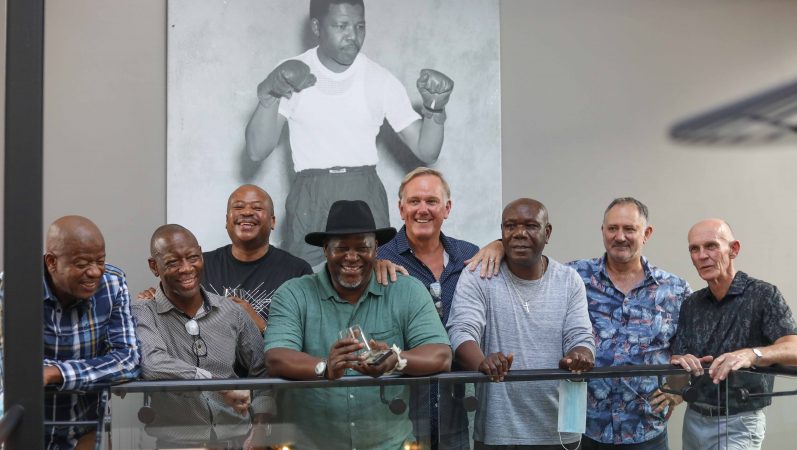 Kaizer Chiefs hosted a very special reunion this weekend of Amakhosi’s class of 1989, as some of the Club’s iconic former players were warmly hosted by the Nelson Mandela Foundation (NMF).

The group gathered at the Nelson Mandela Foundation for an intimate tour hosted by NMF CEO Sello Hatang of former President Nelson Mandela’s private archives and office, before proceeding to Madiba’s Houghton residence the Sanctuary Mandela, which has now been converted into a boutique hotel.

It was an opportunity for the club to bring together its former players and to reunite them over tall tales of their successful playing days, as they remained true to the club’s ‘Love & Peace’ ethos.

“These engagements with our legends are very crucial for the club. We pulled this gathering off in a short space of time, but we are very happy to work with our former players to host these kinds of events. Engaging with the class of 1989 helped us understand from a human and football element just what these extraordinary players meant to us a club and to football in the country – and also what drove them to succeed,” said Chiefs Marketing Director, Jessica Motaung.

The chirps between the former teammates flew thick and fast, with former Chiefs goalkeeper Gary Bailey quipping that “Shane Macgregor’s contribution in 1989 was being the most booked player in the team” in reference to his teammate and former Chiefs striker, who scored 19 goals in that campaign.

Bailey went on to add more seriously that “Shane’s contributions were immense. He showed what a strong team we had all around, with four great attackers, a strong midfield with Doctor Khumalo, a solid defence and me and William Shongwe rotating in goal. I think this was the best team in the history of South African club football.”

Another of the attendees Mike Mangena, who scored four goals in 16 games during that campaign, was complimentary of his former teammates.

“It was an honour to play with these guys. We had a good team and we were very close. Thirty three years is a long time. We need to meet sooner and not wait so long,” said Mangena.

“When I joined Chiefs I was scared. I was happy at Giant Blackpool, then look at all these names. But these guys made life easy for me and I enjoyed my time at the club,” said Seale.

“To this day I still feel the love for this team, and they for me. They continue to remember me to this day. From the beginning my story in getting to Chiefs is an interesting one and given the political situation at the time it took me a journey via Lesotho and Eswatini (formerly) Swaziland to get to this great team”.

Former Chiefs defender Mark Tovey, whose brother Neil joined Chiefs in 1990 after he had left in 1989, joked that ”most people remember Neil. I was better than him and I think I won more than him,” before adding “it was an honour to have played for this team, and it still is an honour to have represented this club and have won what we did in 1989”.

Hatang was very happy to have hosted the club, especially given the club’s special history with the former President.

“Kaizer Chiefs and the late President have a history going back a while. We are very happy to have been able to welcome Kaizer Chiefs to our premises to renew this connection,” said Hatang.

In conclusion, the Chiefs Marketing Director said “we have a few more of these reunions planned for the coming year. It is crucial for us as a club to connect with our past, as it makes us stronger going forward. We hope to include our current senior team and youth team players in some of these events in the future”.